I left for Sri Lanka on the 18 April and stayed 1 night at Negombo with 15 big boxes which I picked up with Nishanta the moment I arrived from the airport.

I was ready for this trip. My timetable for 3 ½ weeks was very full. All together I would visit around 20 schools, a hospital, the solar village ( nickname) and another new poor village. I also would give some workshops. And of course the first week would be filled with unpacking 60 boxes and repacking in 20 bags for the schools.
In this 3 ½ weeks I would have a 3 days break on the beach.

After this 1 night I left for Kandy. I was tired after the trip and had a very good sleep. I woke up quite late on Easter Sunday and looked like I always do at my telephone. I saw so many whatsapps from many different people and thought: what is going on?

I opened one and the message was: are you oké?
Of course I was oké. I looked at the news and saw a bomb had gone off in a hotel.
I ran downstairs to my friends ( at amma’s homestay) and heard the full extent of the horrible news of the bombings on the hotels and churches.
Everyone was dumb struck and we all stayed in the house and listened to every scrap of news.

The next 3 days we ( and the country) were so numb. We could do nothing.
After the 3 day I managed to get to town to change money but most shops were closed. It was a ghost town.
I had to do something and decided to start with the boxes. Gamini came and helped me the first day.

The children would start in a few days time again and I thought I better do something. Then I heard on the news that all schools would stay closed till further notice.

What to do now?
Kanchana and I decided still to go on our trip but we had to shorten it. We would visit the hospital, the chief, the solar village and the teacher of the nursery would open just for us.
We did and it was a big succes. We gave the hospital hats (knitted and donated by Nel Roest) and we gave 2 othoscopes (for ears).

The foodparcels, toys and schoolmaterials were for the solar village. We visited the poorest village with the chief and discussed what we could do. And we visited the door nursery (nickname because we gave a door) with small food parcels, cuddles and educational materials.

After those 3 days I had a break at the beach but is was not an easy dicision to make. Nobody, not even a taxi wanted to take me to the East. Everybody was frightened. When I finally arrived nobody wanted to pick me up again. Ravi my driver for the last 18 years dediced to pick me up. There were many check points and also my bags were searched. But I felt quite safe.

I dedided to stay even after I heard that there was orange code. I stayed with my Sri Lankan family and had more time to visit my other friends. Which I did. Everyday we watched the news. 2 volunteers decided not to come and cancelled their stay .That was bad news on top of everything else. The nation was so sad and I felt it too.

The government decided that the secondary schools would go back first and then the week after the primary schools. Unfortunantely that would be too late for me. But the goverment didn’t say anything about the nurseries (officialy not recogised in Sri Lanka)

So the nurseries opened their doors and we visited 6 nurseries. This was great for everyone involved. Many older children were at the nurseries as well. They felt so bored. All children wanted to back to school. 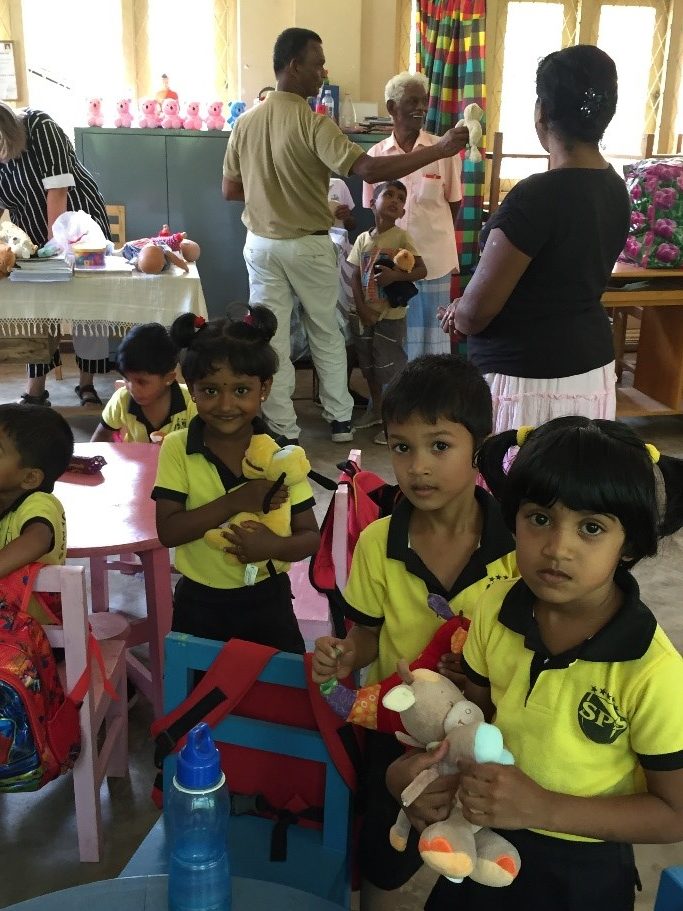 My time was finished in Sri Lanka and I left with a sad feeling in my heart. Will Sri Lanka survive this next disaster?

The not given bags were divided between Kanchana, Nishanta en Chichangranie, waiting there untill I will return to finish the job I came to do.