She stayed each time quite a few weeks and helped special needs school and primary schools. The children loved her, and she prepared very good lessons.

The last time she was there, she told me she wanted to set up two libraries in the schools where she had helped. I have to say I thought she would not pull this off. I thought it would be impossible with the customs, but Robin made it happen. Wow.

First, we had to wait quite a long time because of Corona but towards the end she told me she would be coming over at the same time as I would be there as well. That was great because it would be the first time, we would see each other in person.

There was some trouble on the way, and it was not easy for Robin. She worked very hard to get money from the Kiwanis (aid organization) and with this money she could then set up the libraries.

One day she phoned me as said that she could pick the books up. Robin could choose all the books herself. Then she had the difficult task to send them to Sri Lanka but she managed and found a Sri-Lankan man who asked her not too much money. In Sri Lanka the books were picked up by Saman who had to take lots of paperwork with him. It was not easy but with some to be paid at the customs the books were on their way to Kandy.

There were so many books that not one, but two schools could have their English library. We chose an unknown school and a school where Robin had taught before. Then the work started for Robin as I had my own projects. Sometimes Nishantha went with her as well. She bought chairs, tables, shelves, paint, mirror, carpet etc. The unknown school had a whole classroom which could be a library. They all worked very hard to finish it in time (ten days). The other school found it very hard to find a space and they did not work so hard. That was a pity and very frustrating.

There was a deadline as well, as Robin had to fly back to America … At that time course we also faced curfews and power cuts. Riots in the country. It was a not easy time … I had already flown back but Nishantha came to the opening of the libraries.
But the result is there and it looks fantastic.

Thank you so much Robin!

The trip report of Natasja in May 2022 is on the website.
You can find it under the Trip Reports tab in the Main Menu or click here

Recently Kanchana has done several projects for us.
She has used a donation from the Dietzel family, for which we are very grateful to the family, to purchase Solar-lights and folding tables for the students in Mahaoya.


Food parcels have also been distributed in the Maha Oya area. The poorest families also received a package for the children with underwear, socks, a T-shirt and coloring pencils.


The water well at Warapatiyaj junior school has been re-drilled and equipped with a new water pump. This pump is placed in a newly built lockable room. Also, for safety, two concrete slabs have been placed over the water source. By means of new pipes to the chemistry room, the toilets and washbasins, the school has been supplied with streaming water again. The 220 students and teachers can make use of this. A separate water tank has also been installed that the 49 residents of the surrounding houses can use. The residents use the same water source as the school.


So, a very nice project has been realized here, thanks to the Green Heart Campaign.
We are very happy with this.

The trip report of Natasja and Ingrid in October 2021 is on the website.
You can find it under the Trip Reports tab in the Main Menu or click here

October 14, 2021
After 2 years of absence due to de Corona, Natasja and Ingrid went back to Sri Lanka last Wednesday. 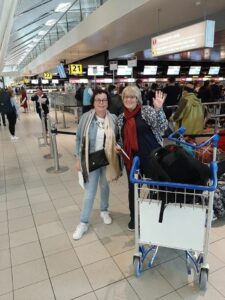 October 16, 2021
Message from Natasha
We have finally arrived in Sri Lanka. So nice to be back.
Although the schools are closed, there is plenty to do.
First 2 days hotel (quarantine Corona) and then we stay with friends.

It has been 5 years ago that Youth4Youth (youth members of VMHC Cartouche from Voorburg) came to Sri Lanka. Youth4Youth then gave hockey lessons to the children of the Mahawatta Maha Vidyalaya school. The head of this school also plays hockey himself, he thought this was such a fun action that he went looking for someone who could take over the hockey lesson.

Youth4Youth had brought the old club shirts and hockey sticks and donated them to the school.
The following year another group from Youth4Youth came to Sri Lanka and they bought a goalkeeper outfit together with Sri Lankan Hope for Children and gave it to the school.

The children of the Mahawatta Maha Vidyalaya school started playing hockey better and better so they could also participate in competitions, which were also won regularly. How wonderful is this for these children.

The school now also wants to set up a girls’ team. For this we have now started a project in the Netherlands to get stuff through various hockey clubs. Think of shirts, socks, shin guards, balls and hockey sticks.

In Sri Lanka, after being closed for a long time due to COVID-19, the schools are finally reopening. Ramani is again very busy to provide all sponsor kids with the right school supplies.

Online teaching does not work in Sri Lanka as the children are not in possession of a laptop at home. So, the school has asked for custom books this year so that the children can work a lot at home as they can only go to school a few days a week.

It has been decided instead of new shoes to buy these custom (more expensive) books for the children. Because the children could not go to school much recently, the old shoes have not been worn much and can last for another year. 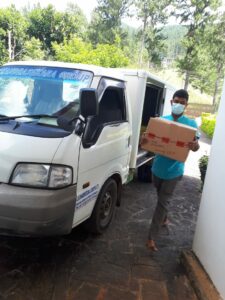 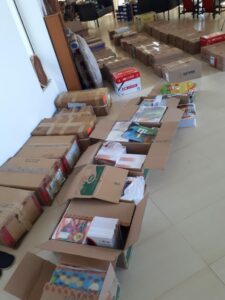 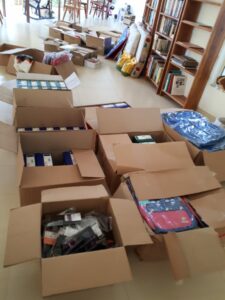 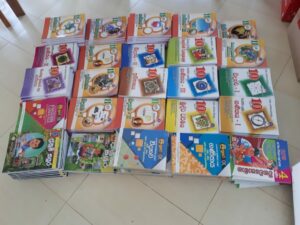 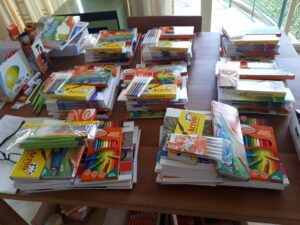 Kanchana, one of the volunteers is doing a project for Srilankan Hope for Children in the area of Mahaoya. We are working together with the chief and he tells us where the poorest people live. In the past we helped one village by giving food parcels and solar units.

Two years ago, the chief told us about another, even poorer village. We visited this village, but could not meet all the people, as there is no road to the last huts.

We discussed with the chief and the nearby headteacher from the local primary school, what we could do to help? Our main focus is, as always, the children. Out the 150 very poor families the chief and headteacher chose the 20 poorest families with schooling children.

We decided in this time of Corona to give each family, with the money we got from the Green Heart Campaign from LC Packaging, food parcels for 3 months and also 25 plants so they could grow their own vegetables.
These plants need less water than other plants.
We continue with this project but because of the lockdown many projects are delayed.

In 2001, I started to take school items with me from Holland to Sri Lanka.  This was difficult as I could only take 20 kg with me. Some people gave me clothes and toys, which made me happy, but how would I take it to Sri Lanka? I tried if people or airlines could take it with them, but again this was very difficult.

My father said it might be a good idea to send a 20-foot container. I wasn’t sure. Where would I get so many clothes and educational materials from, to fill around 400 boxes? I told my father this was not possible. But then something happened which changed everything. At boxing day, we heard about the devastating Tsunami. In less then 3 months we had not a 20-foot but 40-foot container full of 700 boxes, beds, tables etc.

But where could we store this boxes?
Ravi Perera came to the rescue. He owned a biscuit factory and the upper part of this factory was empty. It was a lot of work to get the 700 boxes to this factory. It took us 3 years to divide all the boxes between all the villages, schools and homes.

This had to change. I went back to taking a few boxes with me with the help of some companies which would take the boxes with them.  At that time, I did not have to pay for the boxes or bags. Over the last 5 years around 300 boxes arrived in Sri Lanka.

But where to store those boxes now?
Every year there would be around 120 boxes and because of bombings etc. more boxes came to Sri Lanka than I could divide in one year. Over a period of 5 years the boxes were stalled at Tennekumbura  with the family Wickramasuriya. We as Srilankan Hope for Children were very happy about this. The family had one room filled with all the boxes. I used their home also for dividing all the items. Last year we had to change because the family wanted their room back, which of course we totally understood.

So where to go now?
It is not easy to find a big and safe enough place. Thank God for Nishantha. He agreed to put the boxes up in his house. At this moment there are around 140 boxes at Nishantha’s place.
Nishanta picked up the boxes from Tennekumbura . Heavy work.

And where do I keep the boxes in Holland?
In my garage!

Due to covid-19, travel to Sri Lanka is currently not possible. Then what can you do? You sit behind the sewing machine to make dolls- and Barbieclothes.

If I can go to Sri Lanka again, this will go along with all the dolls received. Ingrid Wester …

What if you cannot go to Sri Lanka?Read More »